Fentanyl’s Devastating Trail of Destruction – When One Pill Kills

Over the last few days, I’ve talked to two parents who recently lost sons to a fentanyl overdose. In both cases, the families had done everything right, including getting their kids into effective treatment and helping them successfully transition back into the real world. One of the young men had been drug- and alcohol-free for ten months; the other for two years.

And then, in a moment, their young lives were over.  Each had taken a single pill, most likely thinking it was made by a pharmaceutical company, which contained enough fentanyl to kill them instantly.

The number of families experiencing heart-breaking tragedies like this is exploding across the country. Over the last decade, the addition of incredibly-potent fentanyl derivatives to a wide variety of illicit drugs has moved from relatively rare to common-place. Using incomplete data from the Centers for Disease Control, the following simulation estimates the number of cumulative fentanyl-related deaths since 2014 by county*:

Apparently starting in Ohio and the Northeast, dealers started replacing heroin with cheap, easily-imported fentanyl about a decade ago.  As it became increasingly difficult early in the pandemic to import heroin across the Mexican border, the pace of change accelerated.  As fentanyl became widely available, drug dealers started making it into pills masquerading as Oxycontin, Xanax, Percocet, etc. and adding it to other drugs such as cocaine.

Able to be produced in tiny, make-shift labs, fentanyl and its derivatives are 50 to 10,000 times per potent than morphine.  The picture below shows how just how tiny a lethal quantity of fentanyl is; carfentanil is 100 times more deadly than this! 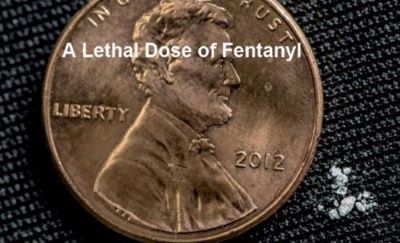 Our country is awash in this poison. In the first nine months of 2021, the Drug Enforcement Administration (DEA) seized more than 9.5 million counterfeit pills. Horrifyingly, DEA analyses found that

Then two months ago, police seized 46.2 pounds of carfentanil in a Southern California drug bust.  Once cut into other drugs, this is enough poison to kill 50 million people – one-seventh of the American population.

The repeated failures of the War on Drugs have shown that it isn’t possible to stop this scourge by limiting supply.  If I were the parent of a middle-schooler, teenager, or college student today, I would become a broken record, telling them “one pill kills” over and over. The only way I can see to save our kids is to educate them about what's happening in the hope that they’ll have the courage to refuse when invited to play Russian Roulette with a pill at a party.

Meanwhile, drug dealers are connecting with teenagers through SnapChat and TikTok, offering to deliver pills to one’s door. “It was as easy as ordering a pizza” lamented a father to NBC News, whose 20-year-old daughter died after taking half a pill she received this way.

* This simulation, along with information about its sources of data and underlying assumptions, is available at www.conquer-addiction.org/overdose-trends.