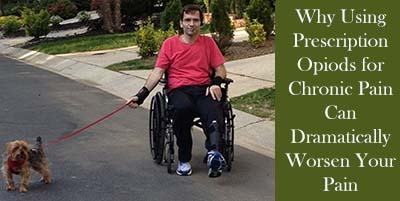 My husband started taking a prescription opioid medication for the same reason so many others do – to deal with pain. In Peter’s case, he started to take Oxycontin (oxycodone) in March 2013 after he badly shattered his hip in an off-road dirt bike accident, causing severe nerve damage and debilitating pain.

Peter eventually got off Oxycontin (cold turkey, because that’s how he rolls), but the challenges of those 18 months are seared in my memory. And what makes me so mad is that his pain doctor undoubtedly knew that his long-term Oxycontin use might have been making his pain worse while destroying his ability to think clearly or do productive work, and wouldn’t tell us.  While our experience happened a number of years ago, I’m telling our story now in case it’s helpful to individuals dealing with chronic pain today.

In the beginning, I was relieved that Peter was able to take a powerful opioid pain killer like Oxycontin.  During the first months after his accident, he told me multiple times that his pain was a 13 on a scale from 0 to 10.  In fact, a few weeks after his accident, the pain was so excruciating he wanted to amputate his leg!  And this from a man with such high pain tolerance that he had once competed in a second motocross race after breaking his arm in the first one.

So it was a real shock to see my normally ambitious, very active husband nodding off on the couch month after month watching endless shows of Breaking Bad.  He experienced suicidal thoughts at one point (a relatively common side effect of long-term opioid usage), but we were fortunate that a prescribed anti-depressant alleviated his depression almost instantly.

A year after his accident, we had an important meeting with our advisors. Peter roused himself enough to ask two crucial questions, but had no recollection 24 hours later of either asking the questions or of the answers we were given.  When I realized how fuzzy Peter’s memory was, I invited myself to his next meeting with his pain doctor.

I described how Oxycontin was affecting Peter mentally, but added how afraid Peter was that his pain would get worse if he decreased the dosage or stopped taking the opioid.  His doctor was totally unhelpful, doing nothing other than pointing his finger at the anti-depressant drug Peter was on and writing another prescription.  At no point did he share that Oxycontin has only been shown to reduce pain during the first few months of use, and almost every clinical trial was no more than six weeks long.  And he certainly never volunteered that pain levels actually decrease for many patients when they stop taking opioid medications!

Meanwhile, I kept sharing my concerns with Peter about the impact the drugs were having on his memory and ability to think clearly, but he was afraid to change anything.

This stalemate continued for another year or so.  Finally, 18 months after his accident, he realized he was having difficulty writing even simple emails because the opioids were making it so hard for him to focus.

Peter being Peter, he decided to stop taking Oxycontin cold turkey, something that is definitely not recommended!  When I couldn’t find a detox program that would take him right away, Peter simply went to bed and lay without moving or saying much of anything for the next several days. He told me later that the second day was one of the worst days of his life, but he got through it.

Lo and behold, his pain was MUCH LESS after discontinuing the Oxycontin than when he had been taking it!  As I looked into how this could be, I discovered that “opioid-induced hyperalgesia” is common.  Long-term use of opioids tends to over-sensitize pain receptors in the nervous system, making pain feel much worse than it really is!  And this didn’t just happen to Peter – since then, several friends have also experienced dramatic reductions in pain when they stopped taking opioids.

Why had Peter’s doctor not told us this?  More importantly, why is this fact not widely known?  It is estimated that 18 million U.S. adults (about 6% of the population) experience moderate to severe chronic pain, and between 4% - 9% of adults 65 years and older use prescription opioid medications for pain relief[2].  How many individuals are suffering unnecessarily?  Please help us spread the word.