Are Some Drug Addictions More Difficult To Recover From than Others? 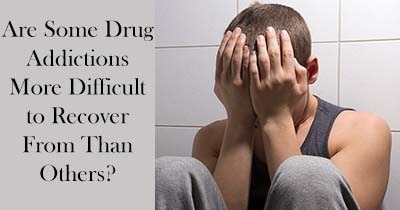 One of the questions I had in the early days of trying to understand my daughter’s alcoholism was how difficult it was to recover from an alcohol addiction was compared to addictions to other drugs.

This article looks at addiction treatment patient data in three ways to help answer this question.

The first way is to compare the percentage of patients who were reachable and claimed to not be using drugs or alcohol one year after discharge according to the substance that patient said was their primary drug of choice. This analysis shows that more patients with a primary drug of choice of alcohol were abstaining from using alcohol and non-prescribed drugs at one year post-treatment (41%) than people in treatment for any of the other types of substances:

By comparison, between 32% and 36% of patients addicted to marijuana, amphetamines, methamphetamines or prescription opiates like Oxycontin or Percocet reported being in recovery at one year.  Patients in treatment for benzodiazepine, cocaine or heroin addiction had the poorest abstinence rates (27%-28%).

The second approach is to look at the number of times patients have attended other substance use disorder (SUD) treatment programs before the current one. 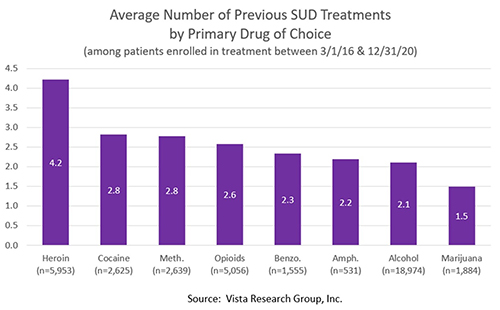 Patients in SUD Treatment for the First Time

Finally, we can look at the percentage of patients in substance use disorder treatment for the first time by primary drug of choice: 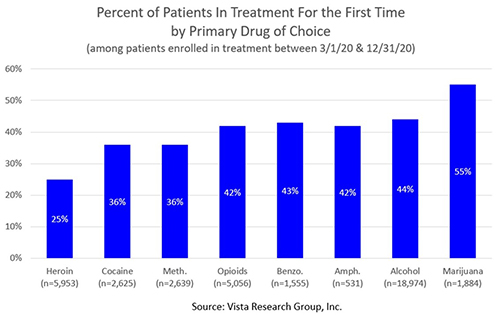 In summary, it's pretty clear that addictions to marijuana and alcohol tend to be somewhat easier to overcome than addictions to other drugs, and that heroin addiction is particularly difficult.  However, it's important to keep in mind that these analyses present averages only; there are certainly patients who are able to permanently stop using heroin after only one treatment attempt and alcoholics who require more than 10 episodes of treatment.